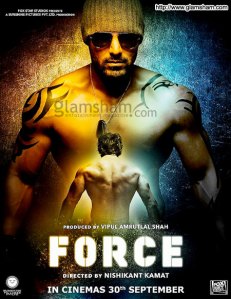 Just saw the movie Force first day last show and came away slightly underwhelmed but not unhappy over all. I mean it’s a good watch if you’re a young guy who can handle all the gore and violence involved, but for some one of the fairer sex or the older more gore averse members of our society will find this one which they can safely avoid.

The movie has a plot which while being slightly typical good versus evil is presented in quite a relevant context by involving drugs as the back drop.

The stars of the film though are clearly John Abraham and the villain of the movie the new comer Vikas, Genelia looks a more mature version of her cuter self and I am personally biased towards liking her and she doesn’t disappoint me at least. he rest of the supporting cast is really good with the exception of Raj Bubbar who looks dead in my honest opinion, special mentions for Mohnish Bhel and Sandhya Mridul.

I loved the music of the movie and the song shot in the desert is going to be on my playlist for a long time to come.

Coming to the story the story is one of John’s character fighting the good fight the fearless cop fighting the drug trade with a small cohesive unit and coming up trumps till he realises that he has been double crossed and the villany begins from then on. This leads to quite a few non typical Indian film moments in the film which were particularly to my liking. The editing could have been tighter, with the movie being perhaps 15-20 minutes too long over all and the love story could certainly have been presented in a more mature fashion, but I guess in the end its a Bollywood movie what do you expect right. The last half hour in my gore adapted mind was the best of the whole movie but I leave it up to you to interpret it as you see fit.

Over all though the movie lacked a sort of connect with the audience as a whole which will work against it, but it will work with the young male ( maybe). So to the movie ‘Force’ I give ** 1/2 (Two and a half stars)